This is it, my old trusty pizza dough recipe and method.  It is divorse and I get the oven in the settlement.  Goodbye, adieu, and I am never coming back.

You see, I have a new love.  Actually, two of them, and they love me back, and we are very very happy (well, perhaps aside from the danger of increasing my derrierre).  Their names are Neapolitan pizza dough recipe and Zoe’s cast-iron skillet pizza baking method, and when they come together, there is a pizza nirvana the likes of which I’d not experienced since… I can’t remember.

I am very serious here.  Pizza is serious business.  I love pizza, and though it makes me gain weight in a frightful manner, I allow it to myself occasionally, as a treat.  And if I am going to use my dessert-allowance on pizza, it better be good.  In fact, it better be great – and this, this surpassed all my expectations.

I’ve made it twice now, to make sure it is no fluke, and it only got better the second time around.  Pinch myself – no, I am not dreaming.  I have indeed mastered pizza.  The sort of pizza that would make me not want to order it when out.  It’s a monumental event in my food-centric life.

And I am not talking about finding the perfect set of toppings here.  Every pizza aficionado will tell you that toppings do not a great pizza make – oh, they are necessary, but if the crust is cardboard, then no amount of parma ham, pepperoni, jalapenos, or whatever it is you love…

… will make matters better.  You’d just end up picking the toppings off the disappointing crust.  So while the toppings are like the icing on the cake, the crust needs to be perfect for achieving pizza bliss.  This applies to any sort of pizza, from pan pizza to paper-thin variants, just that the parameters are different for each – but the point is still, if there are crust bits left on pizza plate after eating, it’s not right.

And having tried to make it this way is the first time me, T and guests have wolfed down the pizza, crust bits and all, and eyed each other’s plates hungrily despite there being a lot, and I mean – a lot! – of pizza.  And despite it having ended up accidentaly vegetarian (and we are all, the lot of us, carnivorous creatures).  It did not matter.  We were in out-of-this-world happy daze of pizza fulfillment.

I could go on and continue to wax poetic, but that’d be just mean.  Instead, I will tell you of the magic involved in this, so that you can experience it for yourself, for I am a strong believer that happiness multiplies when shared.  And I’m all for more (great) food to the people!

First of all, this dough takes a bit longer to make than most pizza dough recipes out there (including my old and now discarded one) – a total of about 3 hours (it’s worth every second).  Second, it has less ingredients (it does not need the added spices, garlic, and oil so often used to dress-up otherwise wrong recipes – like my old one!).  In fact, it’d suffer from having those in it, because – and here we get to the method! – they would all make it burn.

Why?  Because this method involves simulating a wood-fired brick oven in your own kitchen (safely, without breaking your oven’s thermostat or doing anything that goes against the building fire safety codes).  What does that mean?  It means high heat capacity and heat transfer cooking surface, and really high localized temperature.  You’ll need a cast iron skillet.  Nothing else in your kitchen can take this sort of thing (nor would it work).  But, before we get to the part about oven, you need to make the dough.

Dough recipe is adapted from my well-loved Italian cookbook “Savouring Italy” by Michele Scicolone, and it is, according to her, a recipe used in Naples, which is the Mecca of all pizza worshippers (or should be!).  I hadn’t used it originally because I love seasoning and all the other recipes advocated such, but having read up on the method (follows), I understand why the plain crust of flour, whater, yeast and salt is better.  And it is, oh yes, and how!

Note:  I imagine this recipe will only be improved by making the dough with sourdough starter rather than just yeast.  I will experiment, adapt the recipe and post it when it is tested and ready for your consumption.  With photos.

Instructions are very simple (takes 3 hours to readiness to bake):

Note:  I did not bother making a sauce – a drizzling of olive oil from a thin-spouted bottle did the trick here, but by all means, use pizza sauce, pesto, bechamel, whatever you like!  We used a large handful of gräddost (a semi-soft Swedish cheese reminiscent of fontina or gruyere, approximately 40-45% fat) with sliced fresh mushrooms on top and a dusting of dried oregano for one pizza, and sliced fresh fig, crumbled goat’s cheese and a little bit of hot dried red chili flakes for the other.  Or you could use the toppings from my old pizza post (but mind you, not the crust or method!).  The reason you want to do this while the dough rises the 2nd time is because you want your toppings close or at room temperature, so you want to take the chill off them for a few minutes, not use them straight from the fridge.   That, and it’s good to have everything prepared before you start assembling he pizza.

Baking method – the all-encompassingly important way to creating this food of the gods!

The method involves taking a cast-iron pan or skillet, enameled or not (plain seasoned would work fine too is my guess), popping a rack as high as it can go and still fit the pan below the top grill (broiler) of your oven, and preheating the pan in the oven set to the highest temperature it’ll go (mine says 275°C and that’s what I set it to).  Then, when you’ve got your pizza ready and oven is preheated or within 25°c of top temperature, pull the pan out of oven.  It’ll be bloody hot, so you want to use gloves and a non-wobbly wooden stand or large wooden board – I use a sturdy wooden step stool covered with a terry cotton rag.  (In fact, I’ve written in some detail regarding safely handling preheated cast iron for baking bread here.)

When this is all set up and you have your hot pan ready, you take your pizza (that is prepared and sitting on a wooden or metal peel-equivalent covered in parchment and flour so it’s slick) and slide it into the very hot, dry pan.  Best method I’ve found was suggested by Zoe too – having a boyfriend/friend/someone hold the wooden board with the pizza over the pan, while I grab the edge and carefully slide the pizza over into the pan.  Then, you pop the pan into the oven, turn on your top grill (broiler) + fan option if you have it, and watch.  This is not a walk-away for 15 minutes sort of baking, it’ll cook right in front of your eyes to done in less than 5 minutes if even that.  I tend to watch for first signs of blush on the crust, and then rotate the pan (so the side that faced outside is now inside) and let it get to perfect state of doneness.  Then I use a pair of steel tongs to grasp the pizza by the edge, and using a steel spatula drag it onto a plate held by a boyfriend/helpful other person.

There.  Put the plate away (it’s too hot to eat anyhow!) and repeat with second pizza.  I found I like to put the pan into the oven for about 1-2 minutes between the pizzas to preheat it before the second one, but I am not sure it’s strictly necessary.  Also, as fast as this cooks, by the time the 2nd pizza is done, the first one is just about ok temperature to not burn your mouth off – so take them both to the table, pour a glass of your favorite wine, and achieve pizza nirvana. 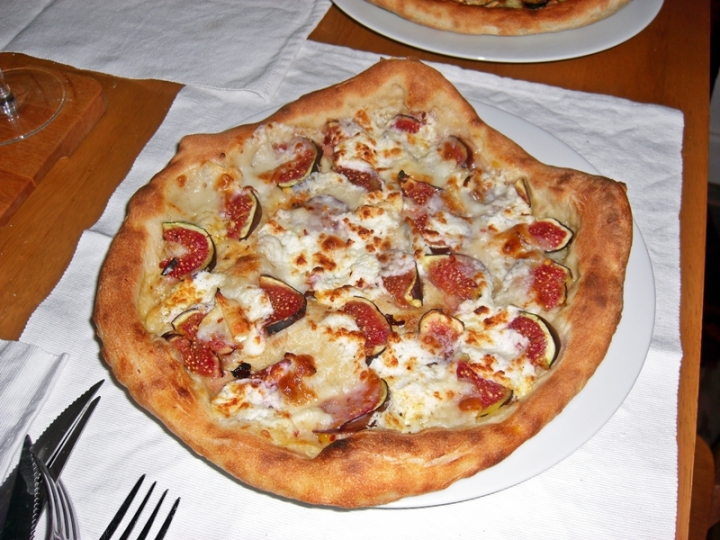 Cry, because most delivery and restaurant pizza will never measure up.  Then stop crying because you can repeat this incredible experience as often as you want (or as your mirror and size of your waist allow you, but that, my friends, is strictly between you, mirror and the jeans)!

12 thoughts on “I Tossed My Old Pizza Recipe Out The Window – Or, How To Achieve Pizza Nirvana”