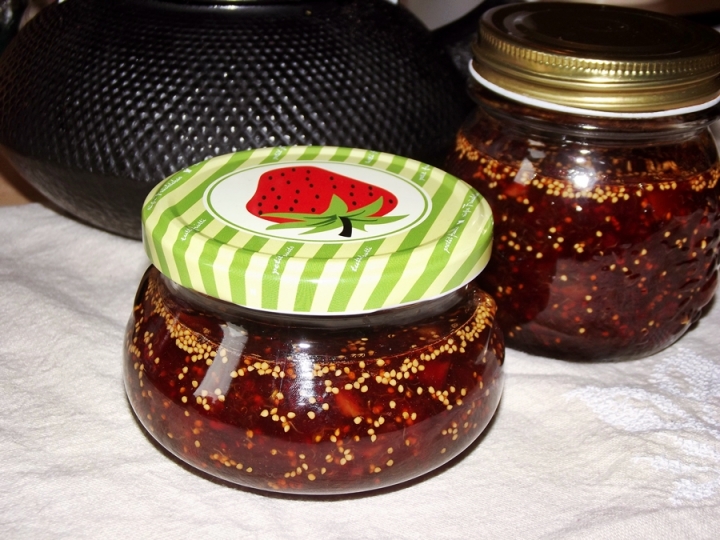 Yes, I know I’ve been lazy and barely posted lately, and, moving right along (because who cares about my excuses, for such they would be), if you want to get to the absolutely amazing (I am not kidding here!) teeny-batch fig jam with spices recipe and instructions, just keep scrolling.  For those of you who want to read the usual expansive babble, I’d like to say a few (more) words in favor of small-and-smaller batch preserving, which, if I were to believe my Pinterest feed and random reading, appears to be the ‘in’ thing in food blogging and fashion.

Just to clear the air here – I still don’t give a flying rat’s ass about fashion.  The cupcakes and cake pops can shove into the nearest black hole as far as I am concerned – all together, now! – and I generally tend to ignore (stupid) food trends when I don’t choose to mock them instead (paraphrased from “All I need to know in life I learned from my cat.”).  That is mostly because, in my experience, most food trends aren’t worth a flying rodent’s rear end and disappear as quickly as they appear (blissfully so).  That said, I am not at all against something which is awesome and useful and easy and thrifty becoming a food trend.  Oh no, I will get on that bandwagon and push because something as great as this needs to be in everyone’s kitchen arsenal.  Particularly in the fall, particularly if you have access to a garden or a plot and are dealing with random none-too-huge (or huge) amounts of fresh ripe fruit.  Or even if you ever visit a supermarket which has a mountain of fresh stone fruit or local apples or berries for cheap that you sort of wish you could do something with, but know you won’t be able to eat before they go off.

Small-batch preserving is that magical something for everyone, because the tools needed for it are likely to be found in any kitchen, in particular if you own a fridge that can take a few 250ml jars (and thus can skip the hot-water processing altogether).  It’s what you can do with that 300-600g of random fruit you picked up at a market because it looked great and now don’t want to go sad and moldy and give you (deserved) guilt about throwing it away.  And the reward-to-effort ratio here is astounding, people!  You do a bit of light chopping and occasional stirring and maybe watching of this for the last half-hour of the cooking process, and you get something that none of those too-much-money-per-jar fancy confections from the cheese department of the nicer stores can compare to.  I am not exaggerating here – I love some good jam with cheese and I’m not above buying things I like – but they simply can’t.  No, I don’t know what it is about homemade jam, but it’s just how it is.

Don’t try to explain it – try it, and then just offer it to friends and family and call it kitchen magic and rejoyce in feeling like a domestic goddess (or god).  Or hide it away in the dark recesses of the fridge and eat it yourself in secret when no one is around that you’d have to share with, if you are that sort of person.  Which I am not.  I like to feed people and bask in their happy omnomnom nom noises and admiration.  Which brings me to this particular recipe.

This particular jam recipe was something I have come up with after this summer in Stockholm a couple of friends let us try a really expensive jam they called ‘Fig Crack’ that they bought from a cheesemonger somewhere.  And verily, the jam they had was amazing.  But… I immediately felt that while the idea of the jam they had was amazing, I could do better.  So I shamelessly turned the jar over and read the recipe, I mean, the ingredient list, off the back of the jar.  And behold!  The secret to this particular jam’s awesomeness was revealed as brown sugar and bay leaves – former instead of refined sugar, and latter in addition to the usual fig jam components.  And so I made a mental note of those, and went back to Finland, and didn’t think much of it until I chanced upon beautiful fat purple Turkish figs in a local store, and greedily bought 6 of them.  Which incidentally is enough for two batches of this jam, since the figs weighed in at over 100g each.

And I remembered the ‘Fig Crack’ and its specifics, and went into the kitchen, and so the jam came to be.  I’ve decided that one cannot go wrong with adding citrus zest to figs, and that I could also use some honey I’d bought from a farmer this past spring – the honey is intensely flavored and smells like a summer meadow on a hot day.  And the addition of honey and citrus in my view, is what took this particular jam from merely amazing to glorious.  This jam is what Greek myths would be made of, if Greeks had myths about people eating something and then never wanting to leave a place again… oh wait.  It’s glorious on buttered crackers alone or with cheese, or on bread, or over ice cream, or whichever way you like to eat your jam.  I imagine it would make a fantastic jam tart, too, but I haven’t tried.  It is a very grown-up jam, not too sugary, with a complex, well-developed flavor which is helped along by the edgy, herbal note from the bay leaves, and the aromatics from the citrus zest and the honey.  Eat it at your own risk (of there being no more jam left).

Anyhow!  If you want a more detailed run-down on tools and hot-water processing, you can read this post.  Since I am not going to bother processing this jam – it gets eaten out of fridge way too fast for that! – all that you need are two 250ml or one 500ml jar with a good lid, sterilized (read: run through dishwasher at 70C or stuck into a 75C oven along with lids upside-down while you cook the jam), a 2-L or so capacity pot or pan (stainless steel is best), wooden spoon or silicone spatula, a thermometer (which is helpful but not necessary) and a canning funnel, which is also optional, if you are careful you can generally do without it here, since this jam is not very chunky.

So, what do you need to make this?

What do you do?

The jam will keep in the refrigerator for up to 6 months.  If you can keep it there that long, that is.