There isn’t much I need to say about this – the result of me waking the starter up (and worrying it’d kicked the bucket), and then thankfully finding out it didn’t.  I will just let these pictures speak for themselves.  There isn’t a crumb photo because the bread is still cooling, so I haven’t cut it yet, but I will happily add that later once I have one.

This is a happy-ending post to the saga of me reactivating Gloop, my Stockholm-brewed sourdough Type 1 starter from dry state.  The recipe for this bread is exceedingly simple – it’s the newer (edited) version of this one, using the 3.25dl water, slightly lower oven temperature (as mentioned in the opening paragraph of said post), and with the lavender taken out, because I wanted a plain, plain bread dough to let me see its development and bubbles without specks of dried herb or anything extraneous in the way.

I think I can pronounce the sourdough test bake in Finland a success. 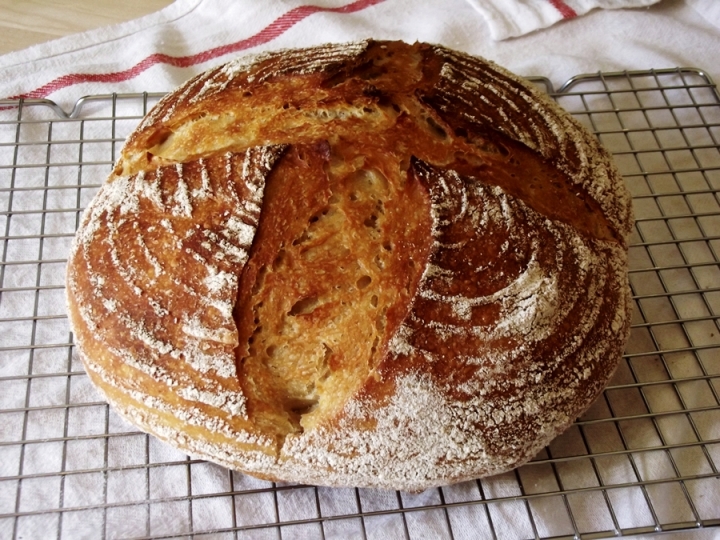 While at it, I would like to say a couple of words about bread flour found in (just about any) Finnish supermarket.  Those words would be – it’s awesome.  The local flour goes up to 14% protein content, and handles incredibly well, creating a beautiful, smooth, elastic dough without much effort at all.  The proof is, obviously, in the tasting (coming up rather soon!), but if the smell is anything to go by, I will stand by the ‘awesome’ verdict.

Here is a photo of the developing dough during the final proof in the banetton.

Note that the beautiful shape and structure was achieved with literally zero kneading, only two double folds after first rise, and very rough shaping.  Color me impressed.

So, with this in mind (and eye, and nose – oh, the smell in the apartment right now is amazing!), I will feed my starter again, and contemplate bread recipes old and new – perhaps something with some rye and wild blueberries (aka bilberries) or lingonberries to celebrate Finland! – to bake over the next few weeks.

P.S.  And yes, I haven’t forgotten my promise of sourdough flatbread recipe.  Now that the starter is demonstrably awake, the recipe for that is on the short-short list of things to bake and write about!