No-knead bread method and I haven’t always been friends. When I have originally tried it, there was a case of horrid gloop that didn’t only have to be thrown out, but necessitated a clean up of half the kitchen, and it was all terrible. But as I am stubborn where it comes to ideas I think ought to work, we’ve gotten along better since then. And anyone who knows me, knows well of my love for both, cheese and anything spicy hot (read that as containing copious amounts of chili of some variety or another). So it’s surprising, really, that I haven’t tried to combine this with the no-knead recipe – until I have, and the result was awesome enough that I need to both, show you the pictures, and also write all about it.

We’ve eaten it sliced as a base for sandwiches, or just buttered alongside a meal, and to be quite honest, I’d eat it just as it is for a snack, because it’s cheesy, it’s satisfying, and really all-round wonderful.

As I wrote previously, we are still in our somewhat-short-budget month, and I also hate wasting food in general. So when I found a slightly-sad block of drying out cheese (it was plain Norvegia which is a fairly generic Scandinavian block cheese, with a bit more flavor than Hushållsost, but less interesting than most sandwich cheeses), I immediately wondered what I can do with it that’d use it up to good advantage. And ‘good advantage’ where it comes to slightly dried out (or even pretty dry) cheese is easy – use it in anything baked, be it on roasted vegetables, on pizza, in cheese-based savory cookies such as sables – or in bread. And, since I was more than a little tired (I am often tired these days because unpacking and various new-to-us house-projects), bread it was – the simplest variation of bread at that.

Because Norvegia isn’t a cheese of much character on its own (cheese gods save me from the hate of Norvegia-fans if such exist!), I figured that a finely chopped red chili (nothing fancy, just a stronger variant of Dutch red chilies you can buy all over the Nordics, and which I tend to keep on hand in my fridge because chili is love!) would liven it up. And it did, and the results – both in terms of ease of handling the dough, and the flavor – were so wonderful that I had to write this up. Because if you like cheese, and you like bread, and you like chili (but of course you do!), you will want to make it. It’s simple, it’s easy, it has (again) no expensive ingredients, and it’ll help you use up the old lingering block of cheese that has been accusingly staring at you from the side of the fridge shelf for a week…

What? Your cheese doesn’t give you aging-cheese guilt? Either you are a better cheesemaster than I am, or else you are lying, and for cheeses’ sake, I hope it’s the former.

So what do you need to make this?

An oven, a large mixing bowl, and preferably a cast iron pot or bottom of one, plus a stainless steel bowl to cover the bread for baking. You can probably just bake it straight up on a sheet, but the results are so much better if you use the cast iron baking method. 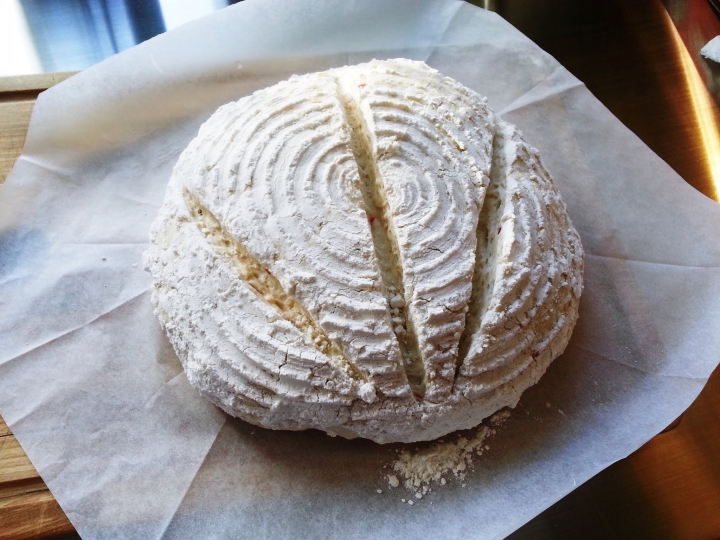 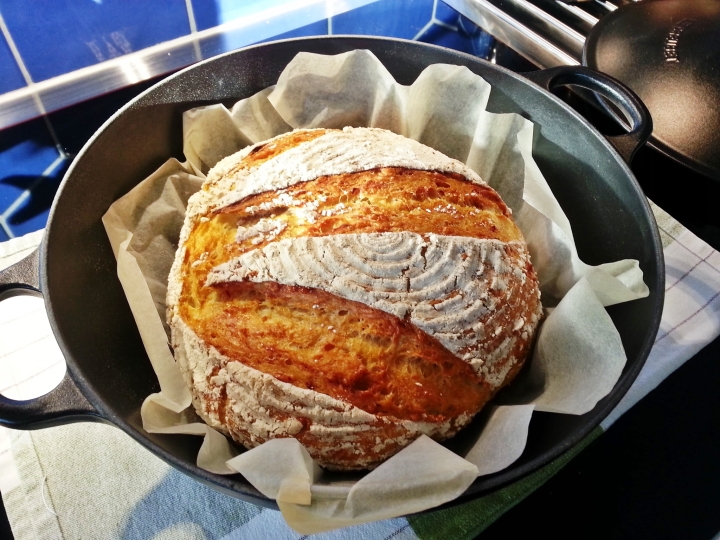 Try to not eat the entire loaf by stuffing it in your mouth with two hands. Just saying.

11 thoughts on “Cheese and Chili No Knead Bread”