A couple of days ago I have implemented a new way to organize things I plan/want to try cooking.

I’m well-known to think about eleventeen things at one at any given moment, and as such, often have brilliant ideas (at least I think they are brilliant at the time!), which I may forget half an hour later (not always, but it happens).  Most of those oft-forgotten ideas had to do with things I’d heard about/seen on the net/once eaten and wanted to cook and find/create a recipe for, and losing them seems like such a total waste.  So what did I do?  I have simply created a spreadsheet with column headers named (in order):  date added, name, date cooked, photos?, blog?, comments, and cheerfully filled in about a dozen recipes off the top of my head.

It’s not an entirely original idea – I think Deb at Smitten Kitchen wrote about having a list at some point, and a spreadsheet seemed like the best way to keep track of things (hey, it’s sortable by columns, yay!).  Anyhow, one of the first recipes to go on this list was a recipe for Shanghai* (see note at end) Chicken by Jo – because I love main courses that feel like snacks, and because I had recently bought a generous bag of raw sesame seeds and this seemed like one of the perfect ways to use them.  Oh, and I love Chinese food.  Not sure I’ve mentioned that enough!

Of course, I had to tinker with it – mainly because I wasn’t about to cook for 6 people, and also because I had to remove egg whites and spice it up more to my taste.  That, and I am not a huge fan of ready-made sweet chili sauce, so I improvised one and it knocked the socks off any you can get outside of Southeast Asia.  (I haven’t been to Southeast Asia, but it definitely beat any I’d had at restaurants in the West!)  So, if you have a couple of chicken breasts in your fridge or freezer and want something Chinese but don’t want to order takeout, this is your ticket – it turns out tender and moist inside, with a slight crunch to the sesame seeds, and all over spicy and aromatic and delicious!  Oh, and it’s really easy to make, to boot!

What you need (feeds 2 hungry people): 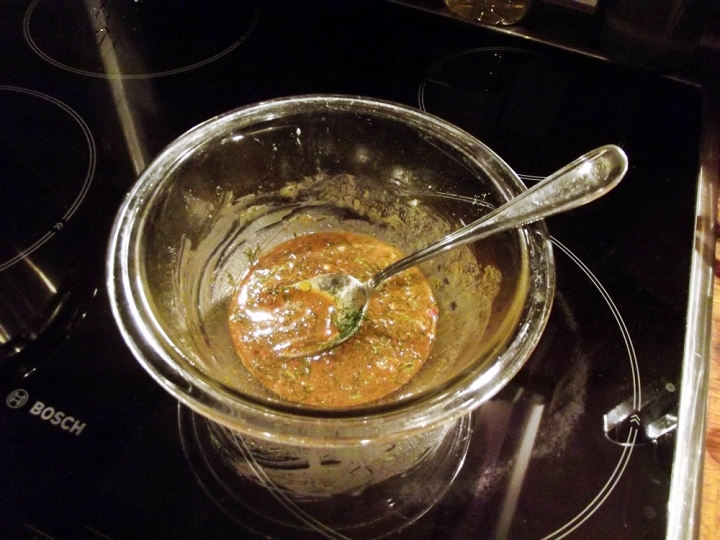 Take chicken strips out and arrange on plates.  Serve with sweet chili sauce and some fruity white wine or your choice of tea.

Try not to be so all-encompassingly absorbed by munching that you forget to turn the oven off like I did, only to have T find it a couple of hours later and curiously ask me if it’s still on for a reason.  Doh!

*Note:  After looking around on the net, it became apparent that the dish is not in any way of Chinese origin, but most likely a dish invented by a Chinese restaurant in the West to suit Westerners and the Western idea of Chinese food.  I’m just including this note to make sure no Shanghai residents get offended or anything – I make no claims of authenticity here, just that it is plate-and-finger-licking delicious.  But you know, you may want to use the knife and fork if you are in public…