Edit:  I have now adjusted hydration from 75% to 70% because the latter makes the dough vastly easier to handle.  If you are adept with wetter doughs, by all means, do use 75% hydration (the full 350ml of water rather than 325ml the recipe now specifies).  I have also reduced the recommended preheat temperature to 230C since it reduces the likelihood of an overbrowned bottom crust.

It would come as no news at all to those who know me that I am a stubborn, stubborn sort. 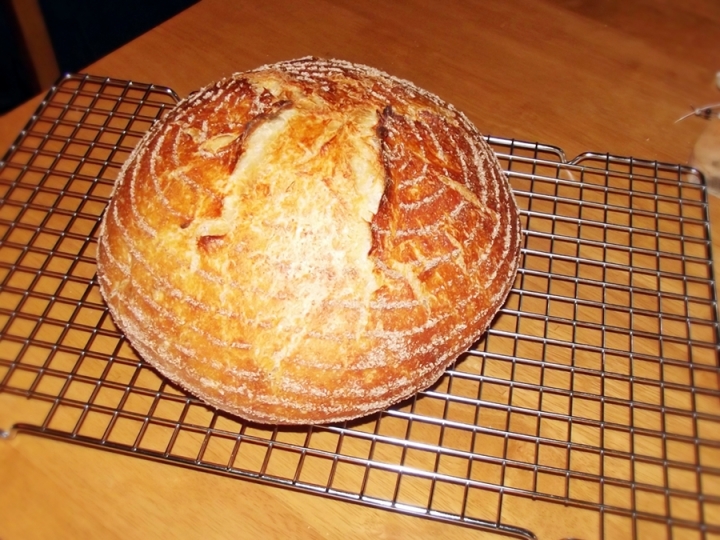 If something defies me, I will hammer at it until I have gotten it.  That goes for most things I have encountered so far, with the notable exception of tennis.  Notable because after having had friends and an ex-boyfriend try to teach me, owning decent rackets, and having taken a course in it, I frankly, suck at tennis still, for all I would love to play it.  But exceptions only prove the rule, and so it was that the no-knead bread that ought to be easy enough for kiddies to make, had dared to defy me.

Which, of course, resulted in frantic reading of everything I could find and alternative recipes on the internet, and interrogating bread-baking friends regarding their experiences.  And adjusting the flour/water balance some, and calculating a hydration percentage to check against something a friend had read in this very good book (Swedish, sadly no translation available – but I plan to both, get it and post recipes, so rejoyce!).  And, obviously, more baking.

And boy, did that make a difference!

The bread rose, and it puffed up further in the oven, and the crust crackled gratuitously as it cooled on the rack when it came out – and the crumb… it was truly impressive, just the right amount of moist chewiness and large and well-spaced holes.  This, this is what I had been going after in that previous attempt!  Moreover, I had used 2 teaspoons of dried (and pretty well pounded in a mortar) culinary lavender in the dough, so the aroma was utterly amazing.

If you haven’t ever used lavender in baking, I would really urge you to try – just please, for the love of little green apples, get the culinary-grade one.  You don’t want a mouthful of soap with your bread, and that is what you would be getting if you tried using something out of a potpourri sachet or something intended for a bath preparation!  But, I digress.

Now, after having made all the adjustments, it is a truly lazy-sofa-dweller-easy recipe for gorgeous bread, and the best part is that if you have a sourdough starter, it is also a completely painless, really novice-proof method for sourdough breadmaking.  One that is, arguably, easier than making bread with regular yeast and other methods.  Now, do I have your attention?

If you make it with sourdough starter, it will also keep like a sourdough.  Which is to say it neither molds, nor goes tough outrageously for several days when kept unwrapped, with just the cut side covered in foil, or in one of those neat bread bags that I do not have.  So not only is this easy, it is a good way to make bread that is not in a hurry to go off, making it a good option when you count pennies and do not want to waste what you have bought.  In this case, that is just flour and salt and the optional lavender – sourdough starter, while not free, only needs feeding about once a month if kept in the fridge, so it is virtually free as well.

Since my camera was not at home when the bread was cut open originally, and there was daylight around, it was photographed two or three days later, which has done it really no harm!

So, to the recipe (minimal as it is), which is this time NOT adapted from any website, nor do I agree with the original New York Times no-knead bread article – neither about proportions, the time to raise it, nor about the whole proofing-in-towel idea, which is frankly asking for a stuck-dough disaster.

The idea, however, is downright brilliant!

Trust me, the wait (and lack of effort) is worth it.