Last two days’ and nights’ wind (I hesitate to call it a storm, it was just a really windy night) tore most of the remaining leaves off the trees around town, and the municipal street cleaners and maintenance have been scrambling to try to pick the piles of soggy wet leaves off the lawns, playgrounds and streets.  The weather has turned from sunny, dry, and cold to cold and wet, which tends to inspire me to bake.  And since it’s conveniently still cold as opposed to deep-frozen (that comes later in the year hereabouts), it has occurred to me that I can use my balcony as a refrigerator annex to house a large (5-liter) bucket of cold-fermented dough.

What is cold-fermented dough?  If you have been reading foodie blogs over the past few years, you may have heard of “artisan bread in five minutes a day“.  The website and the book are both very good resources, although the authors have not (nor do they claim to, that I know of) invented the method – it has been used by pizza and other bread makers for a good long while to handle very wet dough, and the results are generally remarkably good.  I suspect that the reason this method hadn’t been popularized sooner is that few people have enough space in their fridges to permanently house 5L buckets of dough, and also because, while the effort really isn’t much more than five minutes a day, this isn’t an instant-gratification method of baking bread.  For best results with this method, you need to think at least 24 hours ahead.  However, if you do have that much foresight (and balcony, cellar or fridge that can take a large plastic box or bucket), this method is entirely worth trying.  It is very forgiving, it’s hard to mess it up, and it requires very little equipment (no stand mixer – or any mixer, actually).

The basic idea behind this bread is very slightly more advanced than the basic no-knead bread.  This one is no-knead, too, but it does work better for two reasons.  Reason one – unless you are baking with actual sourdough starter, a few more days of fermentation using regular yeast really improve the flavor of bread, so refrigerating the dough after a short rise and letting it ferment slowly works great.  Reason two – dough this wet (we are talking 75% hydration here, which is to say – 75g water to 100g flour ratio) is really hard to handle at room temperature.  However, refrigeration stiffens it significantly, resulting in a dough that has all the advantages of wet dough (open structure, good crust), but handles like a dough with much lower hydration, i.e. far easier.

The procedure for this is simple – you mix all the ingredients (recipe follows) in a large bucket or bowl with a wooden spoon or whatever.  You let the dough rise for 2 hours at room temperature, then snap the lid of the bucket or cover the bowl, leaving just a tiny (pinprick is enough) space for gases to escape, and you refrigerate the dough for 1-6 days.  At any point after the first day of refrigeration, dough can be taken out of the bucket (all or part, depending on how large a batch you made), shaped into a loaf (or flatbread or whatever), allowed to rest, and baked.  No kneading, no judging size doubling, nothing like that.  Yes, it’s easy.

My own recipe for this type of bread varies, but recently the one I’ve been using is this:

You can also halve the entire recipe (this makes two good-sized loaves), or double it if you have the space.  Mix the flour, salt and yeast, add water, and mix until all flour is incorporated.  Dough will be shaggy.  Let rise 2 hours, refrigerate overnight  When you go to grab some dough, sprinkle some flour on the surface of the dough, and grab and stretch the amount you like.  The dough will stretch in long gluten strands.  I tend to snip as much as I want with scissors.

Dump the dough onto a well-floured surface, and give it several folds with 5 minute rests in-between those.  Flour a banetton or prepare a sheet of baking parchment.  I use a banetton because I have one and it makes the bread prettier, but either is fine. 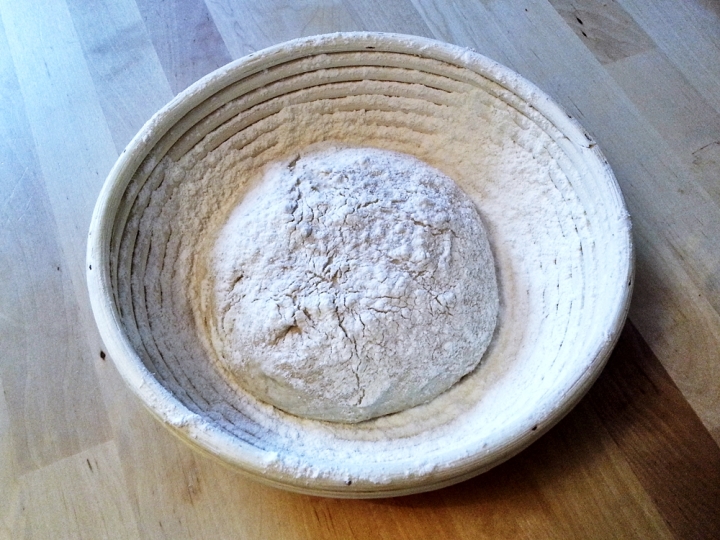 Pick the dough up with well-floured hands, fold it again and shape into a rough ball.  Place in banetton or on the baking parchment.  Add some flour on top, and let rest for a while.  General concensus is that 40 minutes is enough, I tend to let mine rest up to 80-90 minutes, but anything in-between will work.  The dough will expand very slighly while it rests – it will not rise significantly during that period. 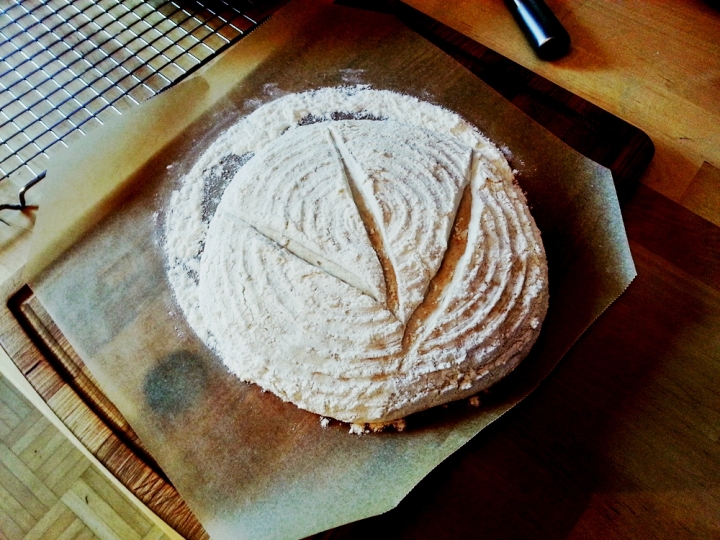 About 30 minutes before you intend to bake, preheat your oven to about 230C, with your pizza stone, dutch oven, or whatever baking implement you are using in it.

Once oven is preheated, if you are using a banetton, you’ll need to turn the bread out onto baking parchment.  I do this by covering the top with parchment and a board and quickly flipping it.  If your bread is already sitting on parchment, well, there it is.  With a sharp serrated knife, slash your bread as you prefer.  My slashing today was haphazard because I was angry (not at the bread), but it can be made as neat and pretty as you like.

Carefully slide your bread onto or place it into your baking vessel and cover if able.  Bake for 25 minutes covered, then remove the cover and bake for additional 25-35 minutes until rich nut-brown in color (in the photo above I have just removed the steel bowl under which I started the bake).  Cool on rack.  Try to not burn your mouth and squash your hot bread by attempting to eat it right away.  It’s easily 100C inside, you know.

Instead, while your bread is crackling as it cools and the aroma is driving all your neighbors up the wall, you can make the happily-nearly-fluorescent-orange winter squash soup.

The soup turns out best if you can get your hands on a Hokkaido (Red Kuri), buttercup (not same as butternut!) or kabocha squash.  Why?  I think it has to do with their texture, which is somewhat drier than that of butternut, but butternut is still a perfectly good substitute.  As is Acorn squash (but this one is a pain in the things to peel).  You’ll need a goblet or immersion blender for this.  Or if you are really hardcore hands-on, I suppose it can also be done with a metal sieve and a spoon, or one of those ancient food mills that I don’t own, but you might.

Here’s what you are going to need: 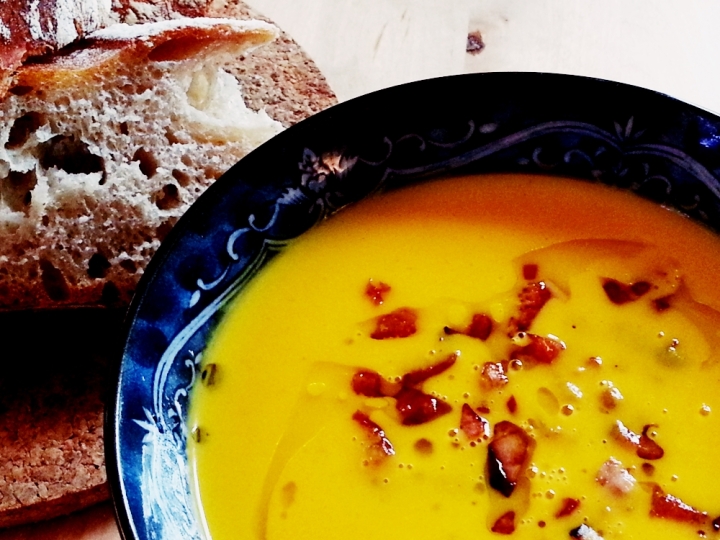 By the time you are done with soup, your bread should be cool enough to cut, or nearly so.  Serve all of this to your hungry and rained-upon guests (they braved this @£$€@! to come see you!), or just eat it all on your own.  Either way, it’s a glorious antidote to the cold, wet and dark.  Happy October!